I have to tell you that I am proud of myself....
here is the second post in just a short amount of time.
I am on a roll!!
Saturday, the Man of the House and I were two faced.  We did something not many people do around here, especially in one day. We donned both the University of North Carolina's colors in the afternoon and then hurried home to switch into our North Carolina Sates colors for the evening.
In the area that I live in, you are either a State fan or a Carolina fan and you support your school all out and despise the other.  Well, we had to be a little two faced on Saturday and seeing that we support both schools financially through #1 and #2's tuitions, I think we were fully in our right.
#3's soccer team was asked to be the ball girls for the UNC's girls soccer game. If  you know anything about girl's soccer, you probably know that UNC's girls soccer is the best program out there. There record speaks for itself....... 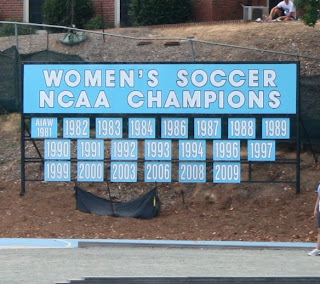 They are the #1 ranked team in the country as of right now. Being asked to be the ball girls was a little bit of an honor for a team of 13 year olds, not to mention it was such an awesome experience to stand right on the sideline and watch how the best players in the country play your position. 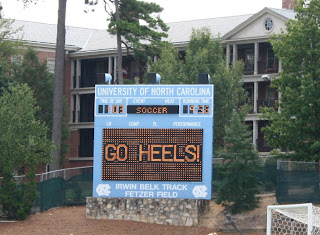 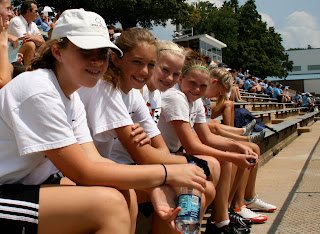 Everything on campus is "Carolina Blue" from the track to the trashbags in all of the trashcans.
(You can see one in the bottom left corner.)
I wonder how much of money goes to buy those specially made trashbags? 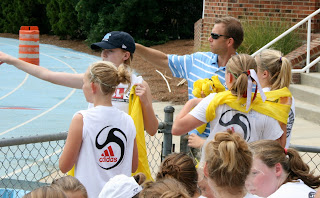 #3 was excited and charged up after standing beside the goal the entire game. She got to see some awesome defensive plays - that is what she plays.  She is the one with the yellow penny and white hat on  the far right. 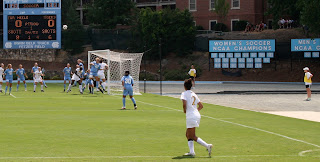 After the game was over, we had to hurry home to get ready for a cook out at a friend's house. We have NC State football tickets and tailgate with a big group of people. Last night we had a preseason tailgate
practice. So we changed from our Carolina Blue clothes into our State Red. 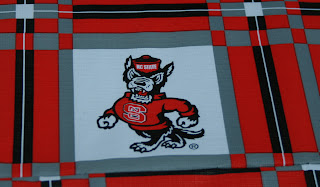 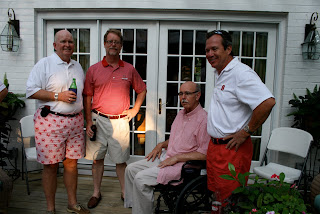 Our friends Pat and Don did a WONDERFUL job and their yard was amazing! 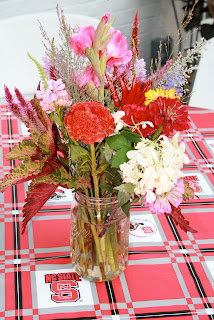 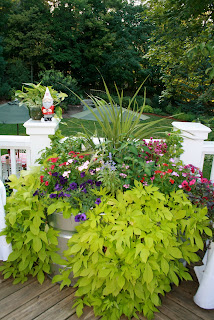 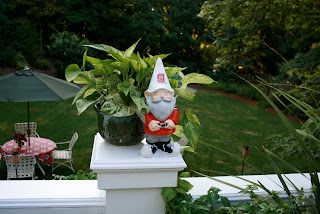 Around here, they are called ITBers because they live Inside The Beltline, where the deer do not set up camp in your backyard. Their yard was so full of everything I love and everything that my deer love too, so I spent a lot of time walking around and drooling. 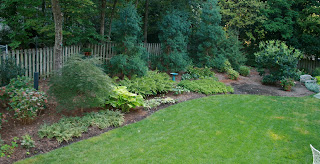 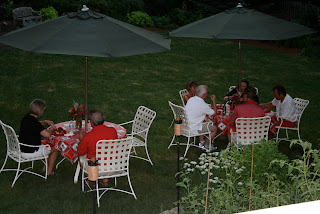 I also spent a lot of time wondering if I could talk any of my girls into wearing a smocked dress just one more time....for old times sake. Since I knew the answer would be a  "no",  I took a picture of this cutie so that I could pretend. 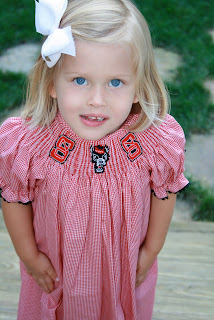 There were way too many desserts to choose from, but I did good and stayed away.... 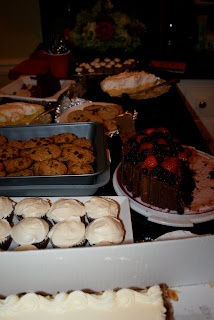 until I saw this one.
I could not resist because it was an old fashioned chocolate layer cake,
just like my grandmother used to make.
It was almost as good as hers!  ;) 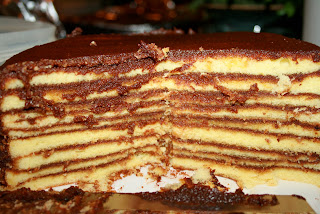 We had a great time Sunday.
We  even got to drop by #1's apartment to take her a few more things and give her a hug before she had to be at Rush practice.
Go Pack!
Go Heels!
Lisa Barrett at 5:38 PM

What a fun post!
North Carolina? I'm wondering what part of NC you live in. I'm in Wesley Chapel and my grass is burnt to a crisp. I want your green grass!!! (and that cake)

Tales From My Empty Nest said...

Glad you had a fun weekend. I know what you mean about being two-faced. There are lots of house divided flags that fly in our neighborhood. Sounds like you had a wonderful weekend. Love & blessings from NC!

That cake looks amazing!
I forgot that those yellow things were called pennys! We used them all the time during lacrosse and field hockey practice.

UNC Women's soccer is pretty amazing! We spent 8 summers with a week in Chapel HIll for UNC Soccer Camp...good to see the pictures, I have many of the same...my girls' considered that "holy turf"....We also have spent lots of time at SAS for tourneys with travel soccer...the Carolina Courage coach is now here at Columbus State University...thanks for the memories, your photos are great!

aww..the dress...I miss smocked dresses too. I may have one or two saved for a granddaughter one day. : )

This makes me wish my kids attended a school in the state at least. Looked like a lot of fun!