Back in June, Brooke applied for a flight attendant position on a whim.
She graduated from NC State in May with a degree in graphic design and went straight into a full time position as the graphic designer for a jewelry designer.
She loved what was she was doing and was making a great name for herself.
She just is not a sitter, right now.
Sitting in front of a computer screen from 9-5 was not what she envisioned herself doing straight out of college.

Again, just days later she was on a plane to Phoenix to spend the next six weeks in full time training. 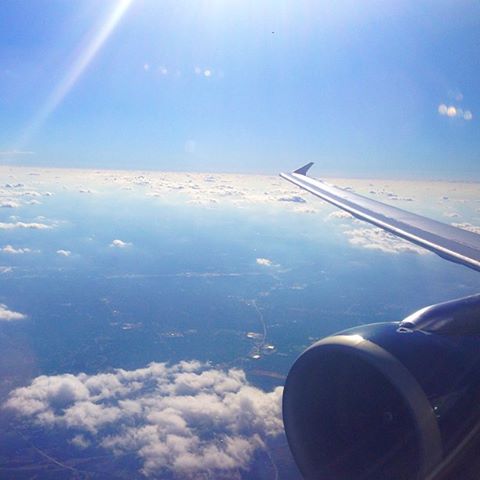 I had to put my big girl/mama pants on and get used to the idea that my girls are at a very exciting part of their lives. I  had to  join in on the excitement instead of looking at these days as something sad.

I have been so excited for her.

Arizona was a fun experience for her, however,
the 100' plus heat was a new thing for her and her new friends. 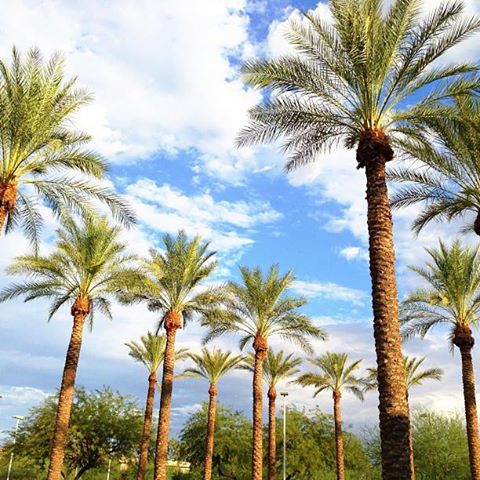 She met and mad some great friends and some very interesting characters! 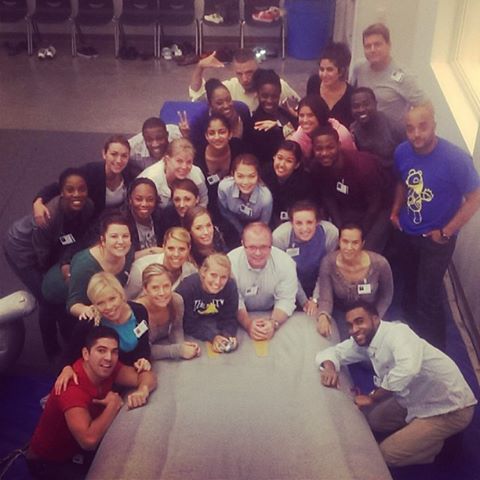 The day they got their uniforms was an exciting one!
I told her I wanted a picture the day she had to start wearing them to training.... 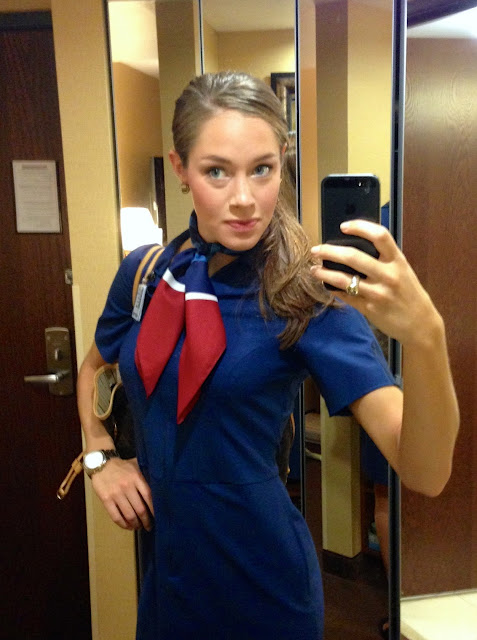 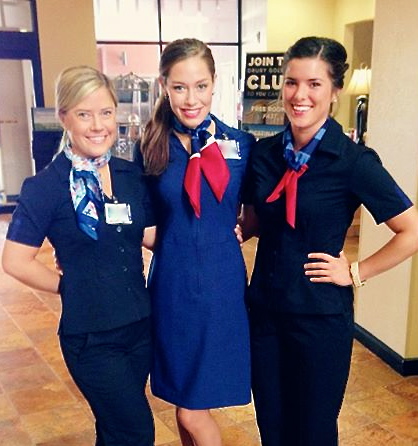 Before they graduated they each got scheduled on a flight to work their onboard exam. 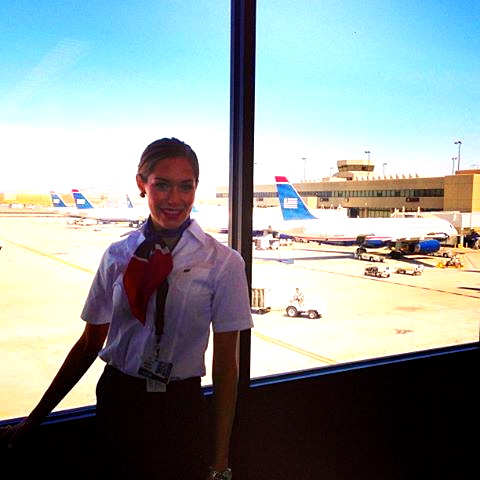 Brooke worked a flight from Phoenix to Chicago.
I could not wait to hear all about it! 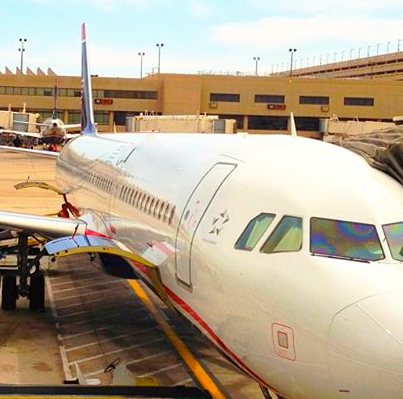 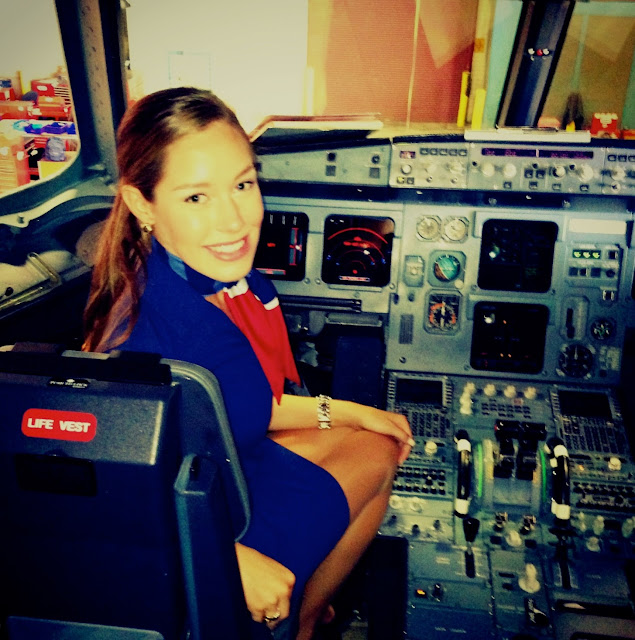 After six weeks she graduated.... 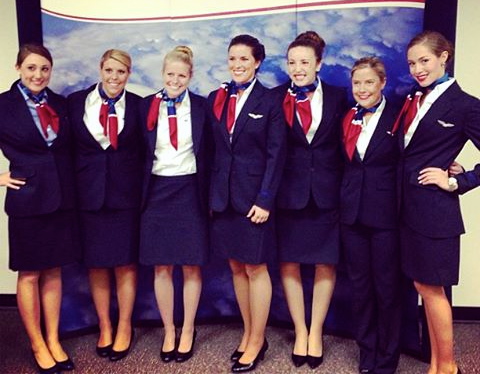 and found out that she would be based out of the DC area
with five others from her graduating class. 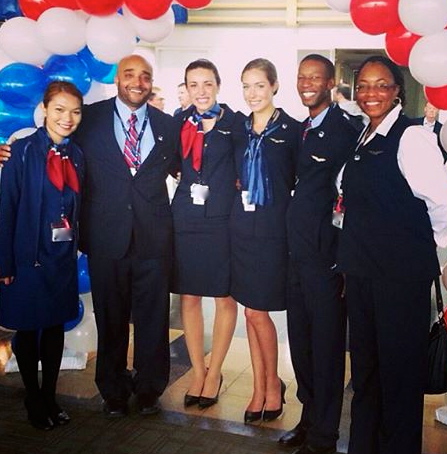 We had five days to get her there, settled and ready to travel the world.
We reluctantly did it. After her orientation,
she was on call for a few days and has been a little jealous of her classmates being given trips to Paris, Amsterdam and Belgium.
She is low on the totem pole because of her age and in the flight attendant industry it is all about seniority.
She is finally excited tonight though!

She got a call from scheduling....
and
tomorrow morning she is headed out.
She will spending some time here..... 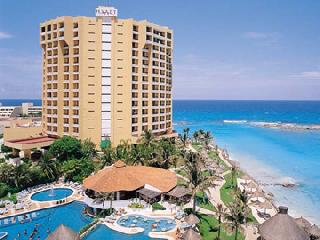 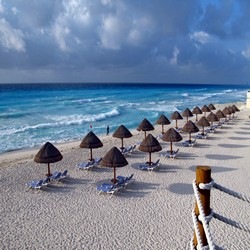 There is something about being out on the water.
We try to take the boat out everytime we are at the beach even if it is just for a short ride up and down the waterway. We are new to boating and I especially do not know much about it.
We have a boat that we bought from a friend that just happened to be upgrading boats about the time we were looking for one.
It is our "starter boat" and the husband likes to say.

As I have said, our beach has canals off of the waterway.... 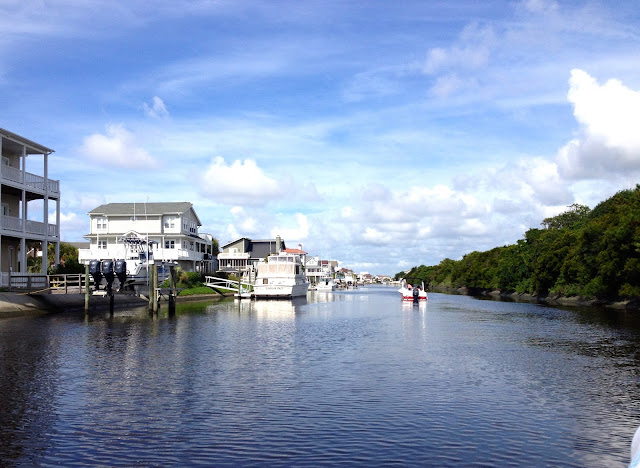 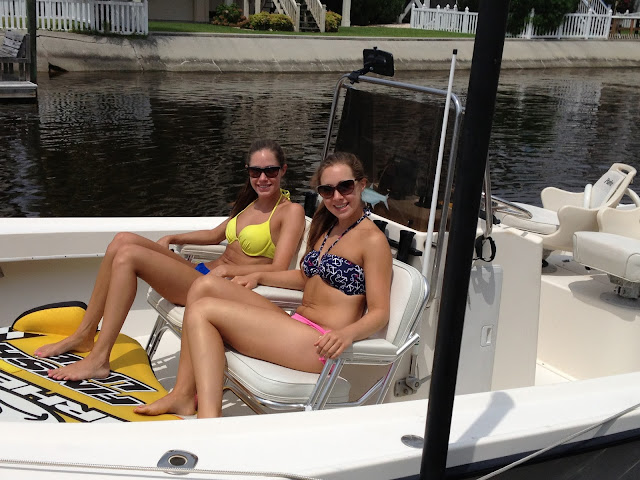 The girls like to ski and go tubing as much as possible. 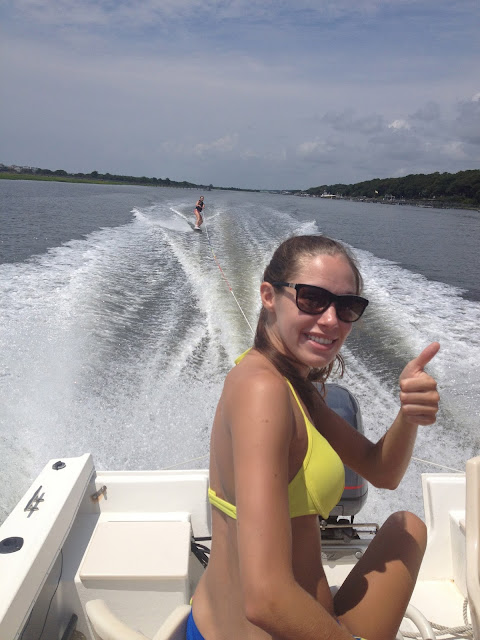 Their dad surprised them with a wakeboard one weekend this summer and Barrett couldn't wait to give it a try. 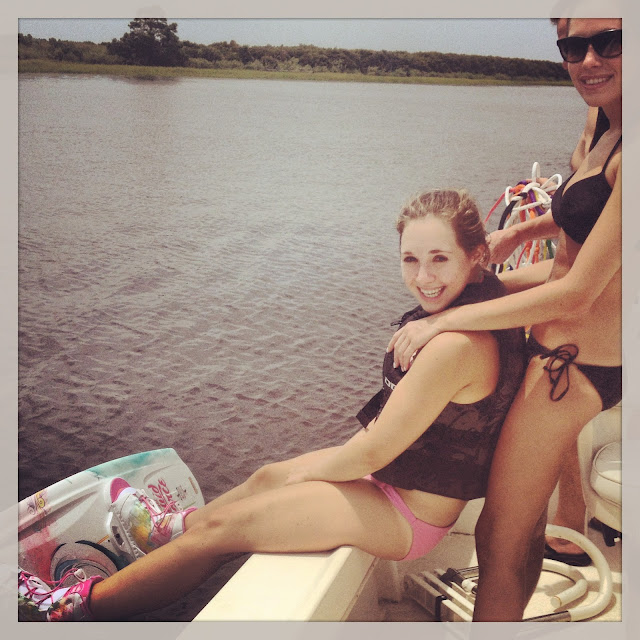 She is a fast learner....she got up on the third try! 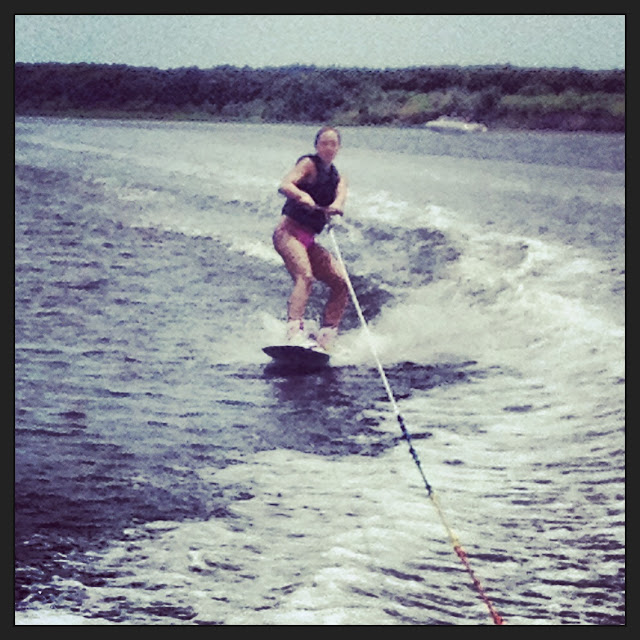 That morning she wakeboarded all the way from Sunset Beach to Holden Beach,
our beach is in between the two. 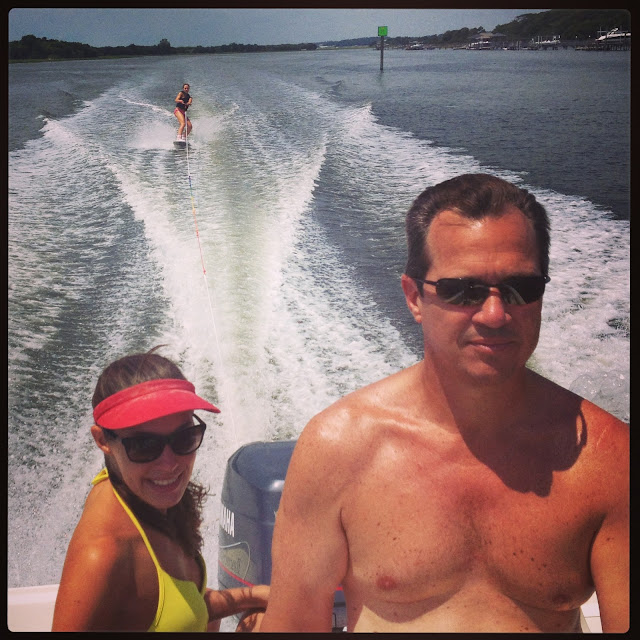 Charlie and Lola went out a few times this summer.
Charlie is more skittish than Lola and it took him longer to get comfortable.
I do think the only thing he liked was all of the wind in his hair (fro), but other than that I do not think he was a fan. 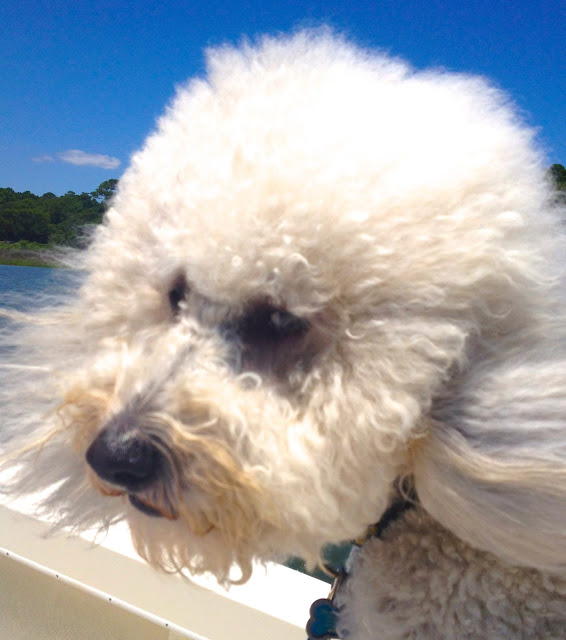 Lola is the braver of the two.
She sat straight up on the tube from the start and then she made her way to the "captain's" chair and sat their on my lap. 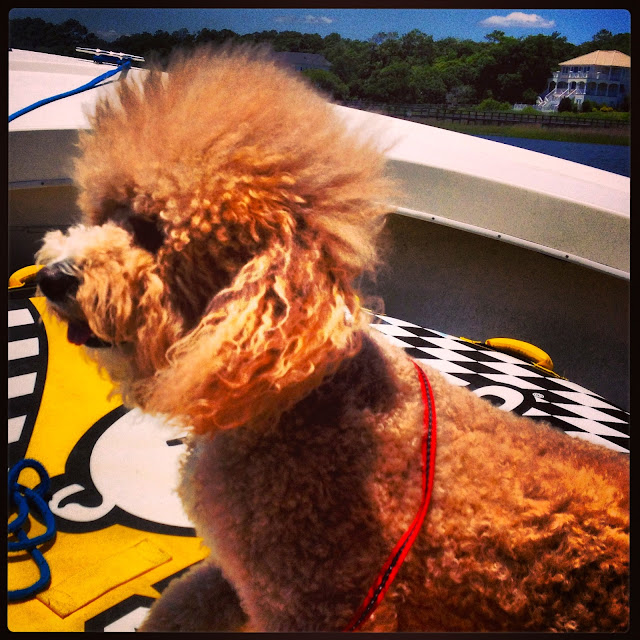 There are several restaurants that you can take your boat to.

Inlet View is at Ocean Isle and yes,
the views are spectacular! 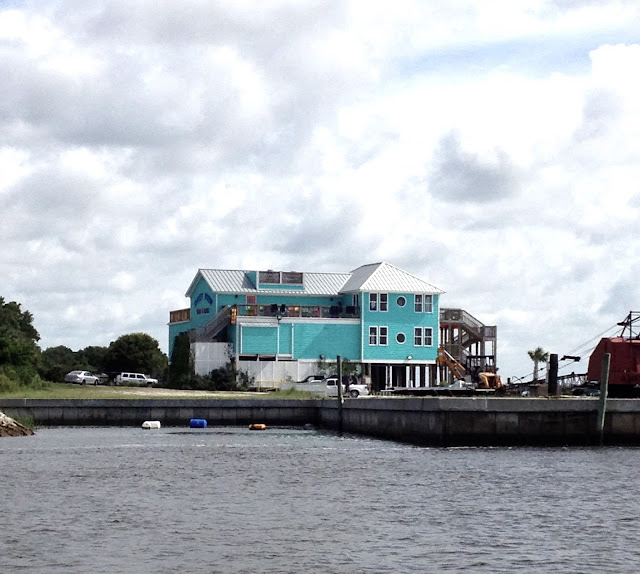 Provision Company is at Holden Beach. 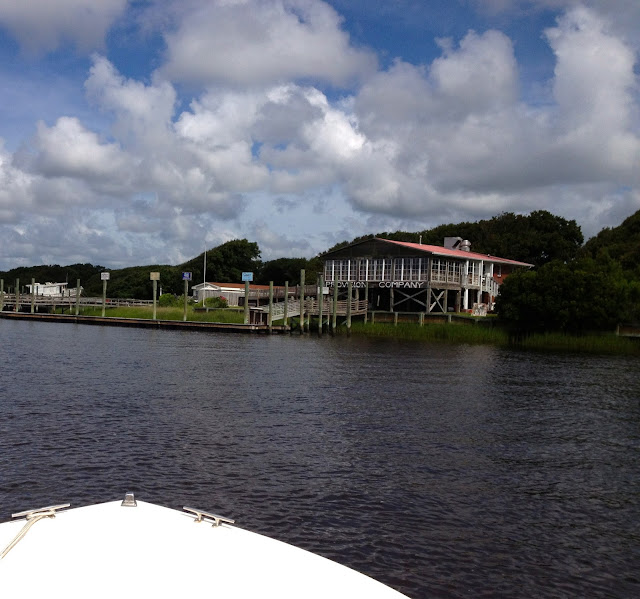 I love just trolling and looking at the sites.
The older shrimp boats take great pictures - even with just the iPhone. 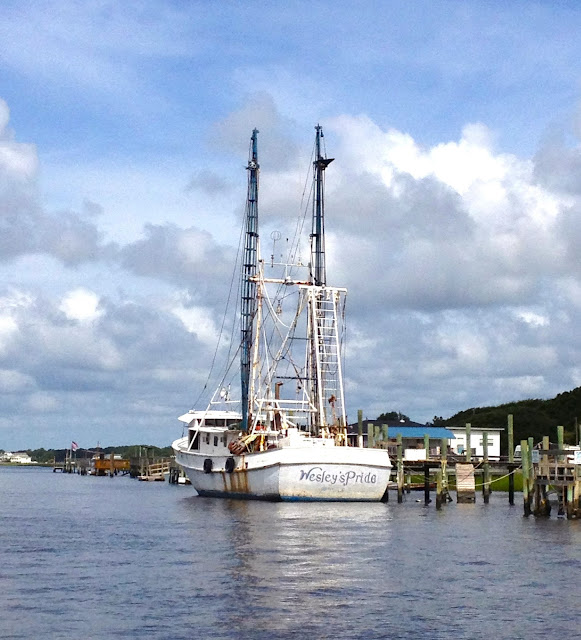 Hopefully we will have a few more trips to the beach and out on the boat before it gets cold.
I have plans to take my good camera and start taking pictures of the shrimp boats, pelicans and anything else that would be great in a black and white print. There is a wall in the house that I want to start filling up with pictures.