It is no secret that I have been very scattered and not very dependable when it comes to blogging this summer. I have had good intentions and BIG plans, however, not many of my plans have made it to the big screen. I have also taken on several projects this summer. And (I know that it isn't the right way to start a sentence.) when I take on something, I go all out and spend a lot of time "researching" (buying books, magazines and making lists and sketching over and over again) to the point that it almost is all that I do and think about. Thank you guys for hanging in there with me and checking in on me when it seems like I have dropped off the planet. I have had one of the roughest nine months of my life with the death of my mom and the cruel and bitter months she suffered beforehand and it seems like all I wanted to do when I sat in front of the computer was to relive here on this blog my loss and my emptiness. I simply avoided that and did/do other things..... but I did/do them all out and poured myself into them and filled up my days with them. I like to live that way, from project to project because I am not a sitter or an idle person. And of course, if I do not have a project going on, I usually end up going shopping and that isn't a good thing.
Like I said, I have several projects going on right now, some are big and I will share them all later.  I checked off a somewhat big one last week and felt like a weight was lifted.
Earlier this summer, I posted about #1's sorority's house landscape issues and that I was involved in the overhaul over the summer. I also volunteered myself to redo the house's front porch. (Ugggg!) They had a fund raiser for the landscape project and raised a lot of money. The only thing they were missing was a landscaper that had a vision. Their landscaper had gotten lazy with a capitol L and was not really doing his job. He also is this natural weed hugging person and apparently believes if something is growing and has rooted itself, it deserves to be there. That does not make for a pretty yard.
Well, he was straightened out for the most part and this summer the sorority's yard got a major haul. A sprinkler system was installed, sod was rolled out and the overgrown bushes were pruned. I planted some planters and ordered pillows for the front porch. It really needed some personality and curb appeal.
Last Sunday we loaded up two cars and headed towards Chapel Hill. All of the girls were there having rush practice so I even got to sneak into the house to watch a little bit of their skits and dances. (Gosh, what a great time in these girls' lives.)
Here are some of the pictures of the yard:
Before: 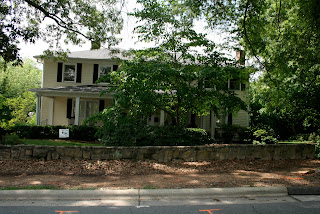 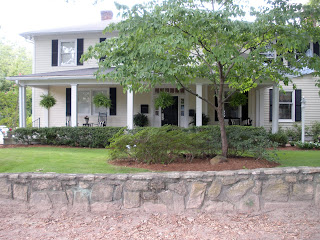 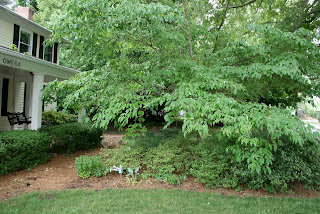 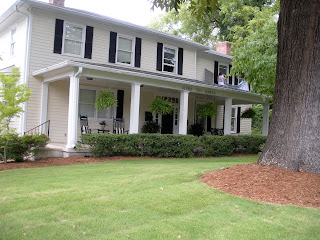 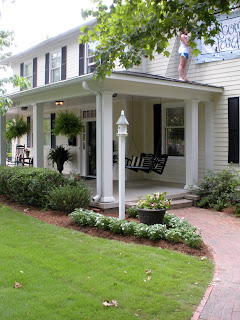 I planted the pot with caladiums and begonias. A friend of ours makes bird houses and so we took advantage of that. After we put this one up, we decided that this one was too small and so we have already replaced it with a larger one and it looks great.
I added the pillows, little table and plant, urns and ferns that are in this picture. 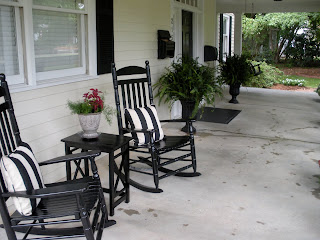 I am keeping my fingers crossed that the pillows do not get stolen. I went to a fabric store and added grommets to the corner of each pillow and tied them to the chairs and swing. Hopefully that will deter anybody form taking them, especially late at night after the parties are over! 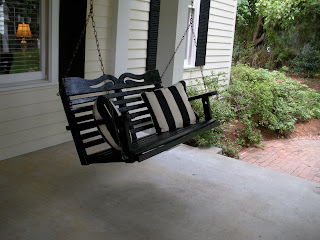 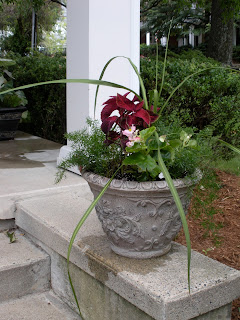 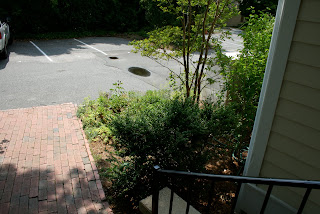 After:
All of the overgrown perennials were pulled up and I added some large planters in the spot with my favorite.... zinnias. 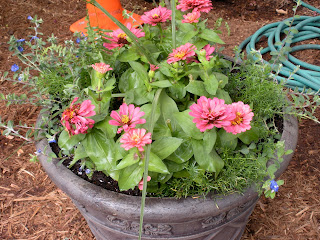 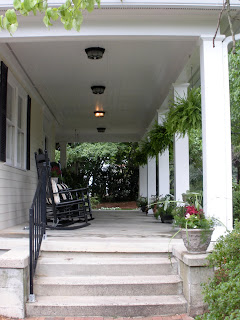 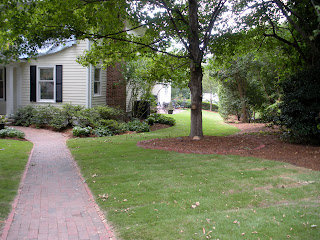 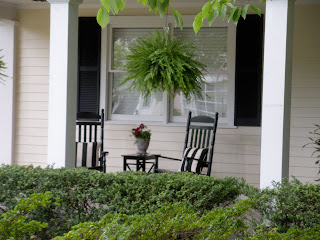 The girls were very appreciative and many went out of their way to speak to us. That was such a good thing to see. I love that they are now proud of their house and are looking forward to rush week.
I was glad to check this project off of my list and have moved on!

just thought I would add a little explanation of the small plants in the containers (you do not get to see the containers of caladiums in between the columns on the front porch). I nursed and babied the pots all summer long. the larger containers had beautiful trailing vinca and swedish ivy in them up until ten days before i took them. we woke up one morning and they all were wilted and rotted looking. i was told that  the vinca had a root disease that killed it. i made many many trips looking for healthy annuals to redo the pots. it is hard to find healthy looking annuals in august!!! #1 and i were a little bit in distress.
like i said,
glad i am DONE with this project!
Lisa Barrett at 1:05 AM

Love Being A Nonny said...

I was by there last Sunday and yesterday too! I saw the girls during RUSH. They were outside!!!! I was telling hubs how you played a part in how GREAT....and I mean GREAT everything looks!!!!!!!!!!! Well done!!! I know they are proud...they SHOULD be!

Can't wait to hear about your other projects!

You did a great job..it looks lovely. I've just returned from a trip to settle my youngest into her apt. You are right-these girls have rough lives : ) I love to see them with their friends...the college years are such a lot of fun. I know my oldest is so looking forward to homecoming and reuniting with her friends who have scattered.

I"m glad you checked in! Time is a great healer and I hope the fall is kind to you.

Wow! You did a great job! Everything looks so nice!! It's hard to see, but it looks like your daughter is a Chi Omega?? Ashley was a Chi-O at South Carolina. In fact, she was the president! She loved it so much. Those ARE fun times in your daughter's life. :)

It looks fabulous! You did an excellent job...I haven't been to Chapel Hill in a few years and would love to stroll down Franklin Street and spend a few hours in Southern Season....I decorate the inside of the sorority house for the holidays, it's nice when the girls are appreciative...you checked off a really big project and started rush off with a great new look for the house!!

Looks beautiful!
I lived in my sorority house for 2 years and it was so much fun...how many girls live in her house? I think we had about 65?

Tales From My Empty Nest said...

Great job, Lisa!! What a gorgeous old house!!! I know the girl's appreciated all your hard work. Love & blessings from NC!

Omg! It turned out gorgeous! Lots of hard work but results like that make it worth it. I'm sure the girls love it. I hope all your girls have a great school year.

Beautiful! It looks like an amazing bed and breakfast and certainly not like my daughter's run down Delta gamma house. They sure do it right in the South :0
You did an awesome job and all the better that it was so appreciated.
well done.